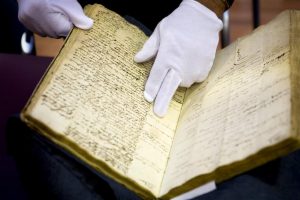 Records of baptisms,  marriages and burials are barely available for the period 1430-1650. Therefore use had to be made of less accessible sources such as tax records, annual accounts of monasteries and judicial sentences by the Court of Holland. This involved a lot of puzzle work. The experiences during this research have been pubished Peter J.M. van Bohe(e)men in the periodical Gens Nostra (see Publications).

The research has not only resulted into data of lifespan, but also into many details about worth mentioning happenings overcoming the discovered family members. However, most  details are not included in the following genealogy for the sake of readability. They can be found in an article by Peter J.M. van Boheemen, published in the periodical Ons Voorgeslacht (see Publications). Thereby the sources are also specified. An copy can be requested using Contact Form.

Spirit of the time

The region where the family lives between 1430 and 1650, we now know as Westland. After the Roman period, this region is almost completely depopulated. From the 10th century onwards, people enter the area again from the old residential areas on the river banks and the sea walls. However, in 1134 and 1163 the reclamations are swept away by storm floods from the sea. Afterwards, the area eroded by the sea is slipped up with sandy clay giving Westland a fertile soil.

Thereafter Westland comes under the rule of West Frisian graves which call themselves graves of Holland. In collaboration with monasteries and wealthy noblemen, Westland is reclaimed  again.
In the administrative sense, Westland is divided into amts, under among the amts of Monster, Naaldwijk, ‘s Gravenzande and Wateringen. The graves often lend these amts to non-local noble families who appoint there a board in the form of a bailiff and some aldermen.

In 14rh century the population is hit strongly by the plague. In the three following centuries the plague turns up  several times. 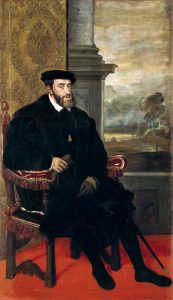 In 15th century counts from the Burgundian House gets the rule over the county of Holland and thereby also over Westland. These are consecutively Philip the Good (1419-1467), Charles the Bold (1467-1477) and Mary of Burgundy (1477-1482). They implement a central administration and a central jurisdiction. This leads to the establishment of the States General, which meets for the first time in Bruges in 1464.

Reformation
Under Charles V, Westland has to deal with the Reformation. In 1581, The religious struggle leads to the dismissal of Philip II as ruler of the Northern Netherlands. However, the Uprising does take its toll in Westland, especially in 1572 and 1573. The farmers are then deprived of their livestock and cereals by the Spanish and States troops. Many farms are set on fire. In 1574 land inundation follows because of piercing the dike along the Meuse for supporting the relief of Leiden.

In Westland, the Reformation leads to villages predominanting by Catholics and those predominanting by Protestants. In Wateringen, Poeldijk and Kwintsheul, the population remains largely Catholic. On the other hand, the majority of the population in Naaldwijk and ‘s Gravenzande becomes largely Protestant. In Loosduinen and Monster, both directions get an qual number of followers. There arises no systematic persecution of Catholics. Shelter churches are tolerated and priests can even be appointed again around 1650.

Rise of horticulture
Around 1500 Westland’s landscape consists of a number of polders with scattered castles and villages with churches, chapels and monasteries. The dike build along the Meuse ensures that break-ins by the sea occur no more. At that time more than 30% of the population in the county Holland already lives in cities as Delft, Leiden Gouda and Dordrecht. In Westland, the population is almost exclusively employed in arable and livestock farming, except the population of Ter Heijde which focuses on sea fishing.

In second half of 16th century horticulture comes up in the form of fruit cultivation (apples and pears). From 1600 onwards prosperity in the county of Holland strongly increases thanks to the oversea trade. From then on, soft fruit (grapes, berries and prunes) is also grown, as well as vegetables (carrots, beetroot, turnips and onions). 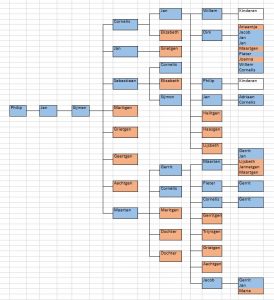 Geneagram with the first seven generations of the Van Bohe(e)men family.

In the adjacent geneagram, the first seven generations of the Van Bohe(e)men family are presented. Starting point is founder Philip born around 1430. On the right side, more than 20 members of the 7th generation are mentioned. They are born in the first half of the 17th century (1600-1650).

The family spreads from farm Vrederust situated in the former Lozerdijkse Polder (later Uithof Polder). Nearly everyone settles close to Vrederust, so in the amt of Monster or the adjacent amts of The Hague, Wateringen and Naaldwijk.

Almost all descendants of founder Philip become farmer of farmer’s wife. They often use a large area of ​​land (in the order of 50 ha). The property of this is generally held by a monastery, church, chapel or charity institution and sometimes by an individual person. There is also used land in the form of a fief.

One of the descendants becomes a corn merchant and acquires the citizinship of Delft. He marries a woman from the influential Van Bleyswijck family. Another family member settles in Stompwijk as peat-cutter. Futhermore some family members become baker in Delft en Leiden.

The level of education is relatively high, since many family members are master of writing and fulfill a public function such as ‘ambachtsbewaarder’ (manager of public works in a amt), alderman or appraiser. The possession of fiefs also indicates a respectable position.  Some family members have considerable assets (in the order of 5,000-10,000 guilders).

As discussed on the webpage Founder, a number of descendants have temporarily the Vercrocht/Vercroft family name like their stepfather or stepgrandfather.

Philip may be a great-grandson of Sijmon Florisz, born about 1320 (see Founder). On the other hand there has been noticed Philip perhaps is a son of Jan Philipsz. who exchanges in 1431 land lying along  the Hollewatering.

Family of the son of founder Philip

Jan Philipsz. leases in 1486 7½ ‘morgen’ (7½ x 0,85 ha) in Escamp Polder from  the ‘Heilige Geest’ (Holy Spirit) and the Chapter in The Hague. In 1518 the lease is extended for 5 years. Presumably Jan Philipsz. lives on Vrederust in Lozerdijkse Polder.

Family of the grandson of founder Philip

In 1544 Sijmen lives on Vrederust. He owns this farm with 6 ‘morgen’ of surrounding land. In addition, in 1544 he uses 29 ‘morgen’ in Monster and 21 ‘morgen’ in Eikenduinen, plus, partly together with someone else, 17 ‘morgen’ in Wateringen. In 1553 the land use is barely different.

Family of great-grandsons of founder Philip

Jan is often described as ‘Jan Simonsz aende Heul’. This means Jan lives in Kwintsheul. He owns there an house . In 1584 this house is sold to his brother Sebastiaan (IVc). In total Jan Simonsz uses more than 50 ‘morgen’, lying half in Wateringen. 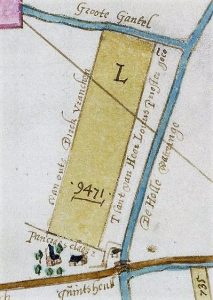 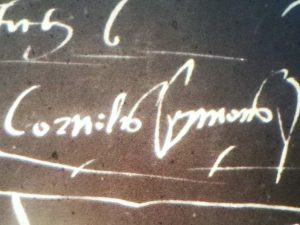 Signature of Cornelis Sijmonsz als appraiser of 10e Penning in 1561.

Sebastiaan is indeed citizin of Delft, but he often stays on the house of his brother Jan in Kwintsheul. There he lets till land by servants which he boards. In 1584 Sebastiaan buys the house from the estate of Jan, but he already stays there in 1577. Earlier he owns his parental farm Vrederust which is  occupied then by his brother Maarten (zie IVd).
In 1579 Sebastiaan uses c. 40 ‘morgen’ in Monster en Wateringen. This indicates he not only buys and sells cereals, but also grow them.
Sebastiaan also acquires a farm in Rijswijkerhoek with more than 26 ‘morgen’, named Ockenburch.

Signature of Sebastiaan Sijmonsz in 1602.

From the first marriage:

Farm Vrederust is shown on the following map from the chartbook of the Abbey of Loosduinen made in 1569-1597. Top right Vrederust has been marked  with as subscript the name Cornelis Jansz. Vercroft. The drawn land borders at the right side to Lozerlaan. In the text block there is decribed, that the green coloured meadow and the grey coloured arable field are used by Cornelis Jansz. Vercroft.

Fragment from chartbook of Abbey of Loosduinen. At the top farm Vrederust.Drawn in 1569-1597 by Jan Potter et al.

Child from the first marriage:

Children from the second marriage:

Signature of Jan Cornelisz in 1594. 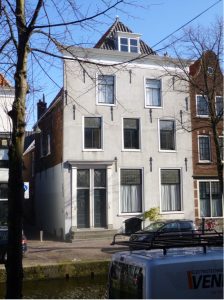 Possible children from the marriage: 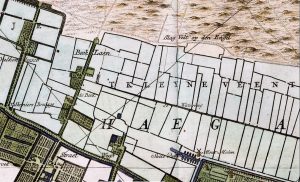 Map fragment with location of Groene Woning Farm (near the word Wegh). Mapped out by Krukius in 1712.

In 1630 Maarten buys a house with barn, haystack and trees on north side of the high-road in Kwintsheul. The parcel extends from the north side of the high-road to the bargeditch. Earlier this house belongs to Jan Sijmonsz (IVb) and Sebastiaan Sijmons (IVc). As an encore Maarten becomes 15 ‘morgen’ in subtenancy. In 1648 Maarten sells the house including the right on leasing of  22 ‘morgen’, 16 cows and all kinds of tools for 4500 guilders to Joris Lourensz (VId).

Child from the second marriage:

Child from the marriage:

Child from the marriage:

Presumably children from the marriage: