The personal data are largely derived from Civil Registers with birth, marriage and death deeds. In addition, family cards found in Population Registers have been used.

For family members born after 1900, a lot of data have been taken from family advertisiments in regional newspapers. The remaining gaps were filled in as well as possible on the basis of verbal information from near family members. These gaps largely concern marriages after 1930 and deaths after 1960. These data can not yet be checked with data from Civil Registers and for that reason might not be entirely correct. The missing data are marked with a ?-sign.

For privacy reasons, there are not presented data for persons who may be still alive. They are described in terms like Son, Daughter, Husband and Wife.

The family tree for the period 1800-1950 has 12 still growing branches with 791 family members (excluding spouses). All person living nowadys with the Van Bohe(e)men family name belong to one of these 12 branches.

In addition there are 8 extinct branches with 30 family members. These branches have no family members born after 1900. The reason is that male members die young, remain unmarried or have a childless marriage.

The fathers being the beginnings of the still growing branches are mentioned in the following scheme. 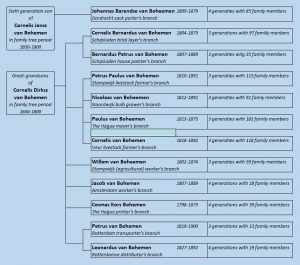 All fathers are, roughly speaking, born in the period 1800-1820. Four of them are brothers. This is also the case twice with two other fathers.

It is also worth mentioning that the first three fathers are Protestants and the other fathers are Roman Catholics.

At the top of the scheme is listed Johannes Barendse van Boheemen (1809-1879). He can be found in the family tree for the period 1650-1800 as a sixth generation son of Cornelis Jansz. van Bohemen (with number VIb.1). The other fathers listed in the scheme are great-grandsons of Cornelis Dirksz. van Bohemen.

The different labels vary widely. They illustrate that, around, 1850 the majority of the Van Bohe(e)men family works outside agriculture. Only the brothers Petrus Paulus, Nicolaas, Paulus and Cornelis are still in the footsteps of their family founder.

The members of the different family branches are found by clicking the links below.

Each family branch ends with a personal name index. Here you can search for the name of a grandparent, great-grandfather and the like. Behind each name there is a number that refers to the place in the concerning family branch.  It must be taken into account that a child sometimes has the family name of Van Bohemen (or Van Boheemen), while the father has the family name of Van Boheemen (or Van Bohemen). Therefor look both to the spelling way Van Bohemen and to the spelling way Van Boheemen.

If necessary, also search in the following sections “Extinct family branches” and “Persons not yet placed”.

The family tree for the period 1850-1950 also has a number of dead-end branches. See extinct family branches

Persons not yet placed

For the period 1800-1950, all persons found with the Van Bohe(e)men family name could be placed in the above-mentioned family branches.