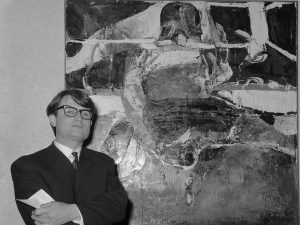 Wedfwoodprice 1966 for Kees van Bohemen, standing for his painting in Museum Fodor on January 14, 1966 (National Archiv, The Hague).

Kees (Cornelis Bernardus) van Bohemen (The Hague 1928- The Hague 1985) is a Dutch painter. He is considered one of the most complete painters in the Netherlands. His fame extends beyond the Dutch borders.

Kees van Bohemen studies in the 1940s at the Royal Academy of Art in The Hague. At the age of twenty-four he receives a scholarship to study in Paris for nine months. At intervals he stays in Paris for five years and there he makes friends with some painters from the Cobra group. Until 1957 he shares a studio with Corneille.

At the end of the 1950s, Kees joines the Dutch Informa Group. Other members of this group are Armando, Jan Schoonhoven and Jan Hendrikse. Afterwards he is indirectly involved in the Dutch Zero movement. He also becomes a member of the Posthoorngroup, Pulchri Studio and the The Hague Art Circle.

Kees quickly soon goes his own way. His early work is characterized by the absence of figurative elements. These paintings are made up of contrasting white and black parties. In the sixties he brings about a sensation with his ‘sports paintings’ with topics such as boxing, horse races, cycling and motor sport. These paintings often have a large size and are characterized by a virtuoso paint treatment. His travels to America (1966-1967) and Africa (1972) lead to exotic paintings.

Color and shape are important for Kees. The choice of the subject is less important to him. ‘I do not want to work anecdotally, do not tell stories in paint’, Kees once says.

In 1985 Kees dies in a hospital in The Hague at the age of 56. Works by his hand belong to the collections of the Boymans van Beuningen Museum in Rotterdam, the Gemeentemuseum The Hague and the Stedelijk Museum Amsterdam.

Cornelis van Boheemen (Stompwijk 1846-Den Haag 1901) is the fifth child in the first marriage of Stompwijk livestock famer Paulus van Boheemen to Pieternella Reeuwijk. His mother dies when he is only 2 years old. Father Paul then remarries three times. In total he gets eighteen children in the period 1839-1871, of whom thirteen become adults. 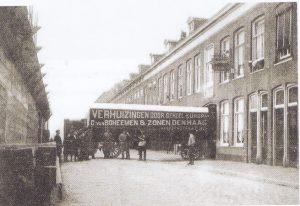 In 1871 Cornelis marries Theodora van Rijn (Stompwijk 1846-The Hague 1924). He sees no future for himself in Stompwijk and therefore settles in 1876 in the fast expanding city of the Hague. There he runs a water and fireshop in the Old Center, where he also sells things like coffee, tea and fuels. In 1884 he moves to the new Dichtersbuurt and starts a stable at Da Costastraat 95. There he rents horses, executes taxi rides with a carriage and stores furniture. He expands this business into a removal company and usees adjacent buildings for this purpose as well.

Cornelis dies of pneumonia in 1901. The moving company is continued by his sons Paul, Nelis, Dorus and David. They manage to rank among the top of 25 Dutch removal companies in 1907. Removals are not only carried out within The Hague, but also throughout Europe as shown on the vehicles. At that time transport over a large distance goes by train (or with ships to Dutch East Indies). In 1916, several buildings on the Kepplerstraat are purchased because of a need for additional storage capacity and putting away trailers. Around 1925 there is a switch from transport with horses to transport with trucks. 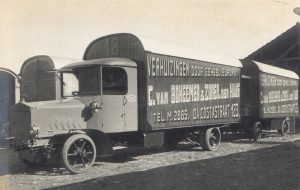 In 1948 son David takes over the entire business in its entirety. In 1959 he is succeeded by his son Dick who chooses for working on a smaller scale. After his death in 1999, the family business ends after 115 years. 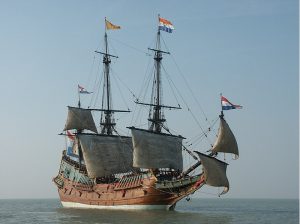 October 14, 1714 Arnoldus gives notice to marry Anthonia de Goijer in the Reformed Curch of The Hague. The marriage is confirmed two weeks later by clergyman Kempenaer. At that time Arnoldus is a soldier under the leadership of Captain Boxtel. According to the marriage registers, both are born and living in The Hague.

If the interpretation of the VOC archives has been carried out correctly, Arnoldus makes no less than six trips to Batavia. The first trip begins April 25, 1717. He leaves behind his wife and a son of more than 1.5 years. Three more or less connecting voyages follows. He always stays away for 2-4 years. Between voyages he is only home for several months. 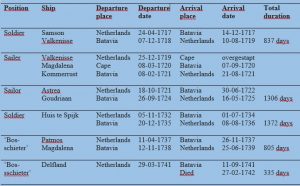 After coming back in 1725 Arnoldus does not go to the East Indies for more than seven years. During this period, his family is expanded with three children. At the end of 1732 he again boards a ship to Batavia. During this voyage, his wife gives birth to another child. Arnoldus then stays away for almost four years. The subsequent voyage takes more than two years.

The last trip to Batavia begins in March 1741. Het arrives in September. Half a year later he dies there.

Arnoldus joins as a soldier on two of the four voyagers. On two other voyages he is sailor and in the last two voyages he is a ‘bosschieter” (experienced sailor who is also charged with firing a gun). 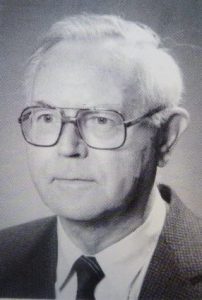 Franciscan Frans van Bohemen is born Nicolaas van Bohemen (Oostvoorne 1917-Nijmegen 1994). His father is een market-grower, but he als runs the pelgrimage-café House of the Two Witnesses across the spot in Den Briel where the nimeteen martyrs of Gorinchem are hanged.

Frans joins the Franciscans in 1940 and then adopts the name Frans van Bohemen. The choice of the Order of the Franciscans is probably due to the fact that seventeen of the nineteen martyrs of Gorcum belong to that order.

In 1943 Frans is ordained a priest in Weert. Then he studies exegesis of the New Testament in Leuven, on which he graduates there in 1949. This period has a great influence on his life, because until just before his death he keeps himself busy with it. He keeps hoping to publish the results of his scientific work in a book. He mentions it a lot.

Frans becomes a teacher at the Franciscan priest training in Weert and Alverna, and later at the Catholic Theological College in Utrecht. He does not stand out because of a systematic approach to the lecture material, but because of the reflections during his lectures. In his role as pastor of the Willem Arntz House he incorporates his view of the Bible in highly praised sermons.

Within his community he takes care of the financial administration, calls forth theological discussions, brings about fraternal conviviality and is an excellent stand-by cook. In his family circle, he is a welcome guest with his cheerful outlook.

The termination of the Wittevrouwensingel community touches him deeply. Once he reconciles and prepares for his move, he suffers a serious heart attack. He is then tied to bed and chair and can hardly express himself anymore. Those who are close to him in those months, share with him feelings of powerlessness. After a loving care in Berchmanianum he dies in peace in 1994. After the funeral service in La Verna chapel in Wijchen-Alverna, he is buried in the churchyard.

Uniform of infantryman of the line

Jan van Bohemen (1787-1813) belongs to the family branch of which several members become soldiers. In 1811, Jan, like his father and a brother, works as a fruit seller in The Hague. On April 18, 1812, he volunteers to serve in Napoleon’s army. He joins the 88th Cohort. This army unit is intended solely for the security of the own departments. South Holland then belongs to the Mouths of the Maas department.

However, after the Russian Campaign debacle, Napoleon wants to rebuild his army and breaks his promise. As a result, the 88th Cohort is incorporated on January 1, 1813 in the 146th RIL (Regiment Infanterie de Ligne). This infantry regiment joins the XIe Corps of Marshal MacDonald.

MacDonald goes to Silesia with an army of 100,000 men to fight with the 90,000-man Silesian army made up of a Prussian Corps and two Russian Corps. This culminates in the Battle of Katzbach lost by MacDonald. The losses on the French side consist of 12,000 dead and 18,000 prisoners, as well as a large number of guns and other equipment.

MacDonald then retreats, but the 17th Division, including the 146th RIL, is left behind at the Bóbr (river in Silesia). This unit surrenders to the Russians on August 29, 1813 after an unequal battle with heavy losses. After the capitulation of Napoleon in May 1814, the surviving men return to The Netherlands.

What soldier Jan van Bohemen experienced, is unknown. He dies of fever in a hospital in Erfurt a month after the atrocities.