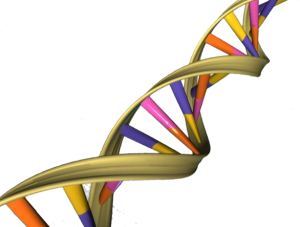 Schematic representation of the double helix (spiral staircase) in DNA.

Written sources from before 1500 are scarce. For Dutch people with an immigrant background, this already applies to written sources from a much later date. In that case DNA research can offer a solution. This may involve tracing early ancestors or determining the degree of kinship between persons still alive. DNA testing can also be valuable in situations where a written source is not considered to be sufficiently reliable.

Research based on Y-DNA

Webmaster Peter van Boheemen takes a first step in 2007 by participating in the Dutch project ‘Sons of Adam in the Netherlands’ (see Publications). A second step follows in 2017 by participating in a comparative DNA-study together with four other male members of the Van Bohe(e)men family.

Both tests relate to the DNA in the Y-chromosome (Y-DNA). It benefits from the fact, that a son basically has the same Y-DNA as his father. Therefor every present-day man should have the same Y-DNA as the most recent common forefather of all present-day men. This forefather is called Y-chromosomal Adam. He lives in Africa 150,000-300,000 years ago. At that time he is not the first and also not the only man, but we may say he is the only man who has still descendants in the world today.

When Y chromosomes are reproduced, however, there may occur a small error which is passed on to descendants. Such mutations explain that there are differences between present-day families in composition of the Y-DNA.

The five male family members who participate in the comparative DNA tests, have a common forefather born around 1760. The test results demonstrate that all five participants have the same mutations in the Y-DNA. This proves the five are not only related to each other in a legal sense, but also in a biological sense. At the same time, the comparative DNA tests reinforce the reliability of the family tree created (and also the family feeling among the participants).
Additional tests with participation of male family members from previously split-off family branches can further enhance the accuracy of the family tree. If there is interest in participating, let me know. This can be done using the Contact Form.

Based on worldwide research on human fossils, it has since been determined for many mutations where and when they take place. This makes it possible to trace the route traveled by the descendants of Y-chromosomal Adam.

Webmaster Peter van Boheemen has a series of mutations classified as haplogroup R1b-L48. His descent of Y-chromosomal Adam is presented in the following overview. 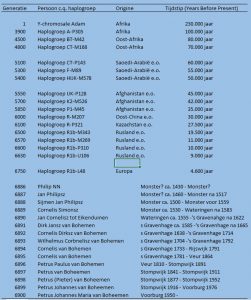 Under Y-chromosomal Adam, mutation P305 is mentioned in the overview. This mutation takes place in Africa about 100,000 years ago. It is the earliest mutation that does not occur in all present-day men and is therefore seen as the first split off in the male pedigree.

The later mutation P143 marks a crucial moment. Because it is a mutation that occurres outside of Africa. It happens to a forefather who lives 60,000 years ago in the Middle East (Saudi Arabia). He belongs to the group that leaves Africa shortly before due to drought and follows wildlife to greener, more northern areas. Presumably they cross from present-day Ethiopia to the Arabian peninsula.

Between 45,000 and 20,000 years ago, the forefathers, roughly speaking, migrate via Afghanistan, West China and Kazakhstan to Russia. Less than 4600 years ago, migration to Western Europe coincides with the spread of agriculture. About 700 years or more ago, the then forefathers settle on the border of the current municipality of The Hague with the current municipality of Westland. The overview ends with webmaster Peter van Boheemen who is born a short distance away in 1950. 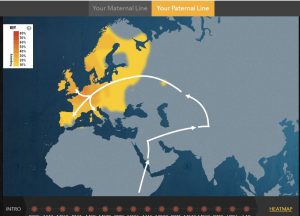 Haplogroup R1b-L48 is found to a large extent in the northwestern part of The Netherlands. Here about one out of five men is part of this haplogroup. 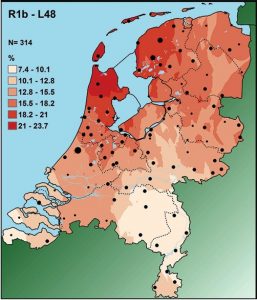 Postscript (same for mtDNA)
Two male persons with the same series of mutations in their Y-DNA do not necessarily belong to the same present-day family. The most recent mutation may have occurred thousands of years ago. The forefather to whom the most recent mutation occurred is the common forefather. Apparently, several present-day families originates from his descendants.
For example, the aforementioned project “Sons of Adam” demonstrated that webmaster Peter van Boheemen has the same series of mutations as another participant. The two patrilinearities that go back to around 1500, however, have no agreement. All this means that another indication (for example, a written archive source) is required to prove a close relationship, in addition to an agreement in the series of mutations in the Y-DNA.

Research based on mtDNA

It is remarkable that the mitochondria of a child contains the same DNA as those of the mother. The mtDNA of the father is not passed on.

Mutations in mtDNA occur occasionally, just like in Y-DNA. This makes it possible to trace someone’s foremothers on the basis of mtDNA. In this way there can also be determined whether a legal female pedigree based on written archive sources is also correct in the biological sense.

The mtDNA of webmaster Peter van Boheemen has a series of mutations that is classified as haplogroup H1c13. His descent of so-called mitochondrial Eve is shown in the following overview. Mitochondrial Eve, like Y-chromosomal Adam, is considered to be the most recent common foremother of all present-day women.

In the overview the generation number of different foremothers are mentioned on the left side. Mitochondrial Eva has the number 1 and the webmaster Peter van Boheemen mentioned at the end the number 8000. The number 8000 is based on the assumption that, on average, four female generations occur in a century. For a period of 200,000 years this comes to 8,000 generations. 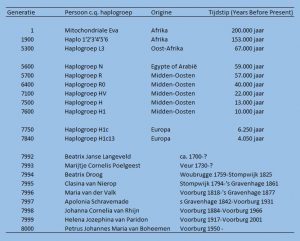 Mitochondrial Eve, like Y-chromosomal Adam, is neither the first nor the only woman at the time. She lives in the Old Stone Age in present-day Ethiopia, Kenya or Tanzania. She probably has dark skin (as protection against sunlight), dark hair and brown eyes. The fossils from southwestern Ethiopia (195,000 ± 5000 years BP) include a young woman with a height of 162-182 cm and a weight of approximately 70 kg.
Other fossils found near the human bones give an idea of ​​the way of life along the Omo river. The people eat fish, birds and anything else eatable that they could collect in the surrounding swamp, grassland and forest. They manufacture their utensils from flint and from the bones of birds and wild cattle.
At that time, it is much more humid in the Omo Valley than it is now because of the Saalian ice age, when the northern half of the Netherlands is covered with ice and the Veluwe embankments are formed. The greater cold in the north leds to more rain in Africa. The Salien lasts until around 126,000 years BP.

Until 10,000 years ago, the foremothers reside in the Middle East. Afterwards they move into Europe. About 300 years or more ago they settle in or near the current municipality of Leidschendam. The overview ends with webmaster Peter van Boheemen who is born a short distance away in 1950.

A more detailed analysis will no doubt become available in the near future. 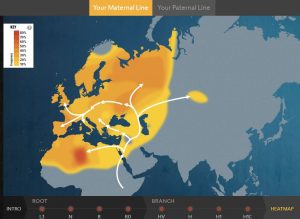 Research based on atDNA

In autosomal research all chromosomes are analysed, except the sexual chromosomes X and Y. For each person this results in a unique combination of DNA characteristics.

For people who are very closely related to each other, there is a large similarity in the DNA profile. However, the farther apart the relationship, the less similarity. This dilution is fast. As a result, research based on atDNA is not (yet) suitable for demonstrating a distant relationship.

In a child, half of the atDNA comes from the father and the other half from the mother. This rule does not apply to earlier generations. For example, a child does not receive exactly 25% of the atDNAl of every grandparent and exactly 12.5% ​​of every great-grandparent.  This is a consequence of the exchange of DNA-pieces (crossing-over) between the chromosomes of the same pair in egg and sperm production. This phenomenon is called recombination.

Recombination explains that a person has barely any atDNA of some of the 128 ancestors born eight generations earlier. As a result, only half of the ancestors  among those of ten generations ago are present in the atDNA. Generally speaking, atDNA can only be used to search for ancestors born after 1700. Therefor it is advisable to have  several family members participate, so a kinship can be approached from multiple sides.

The extent to which atDNA matches, is expressed in the number of equal pieces of DNA and the total length thereof, measured in centimorgan (cM). There are tables indicating how many centimorgan may be expected in a certain family relationship such as a cousin or a great-uncle.

The atDNA of webmaster Peter van Boheemen  has not yet been analysed. Therefore he has no experience yet with checking the similarities of his atDNA with others in his family tree and tracing for him still unknown members of the Van Bohe (e) men family.

Research based on X-DNA

As mentioned earlier, a woman has two X chromosomes. One comes from her mother and the other from her father. A man only has one X chromosome, besides one Y chromosome.

When a father passes on his X chromosome to an descendant, he gets a daughter. All his daughters will receive therefore the same X chromosome from him. DNA research based on X-DNA can therefore be used to determine whether two women descend from the same father.