The oldest use of the family name Van Bohe(e)men occurs, as far as know, in a notarial deed dated June 26, 1636. Thereby Dirk Jansz. van Bohemen is mentioned as leaser of some parcels in the West-Escamp polder in The Hague. Dirk Jansz. then lives on short distance on a farm near the hamlet of Eikenduinen (see Founder). 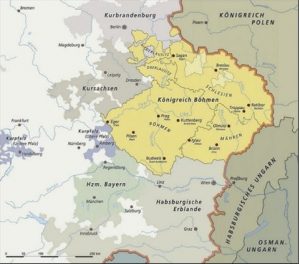 It is possible, however, that the origin of the family name has to do with the relation between the Republic of the United Netherlands and their rebellious Protestant kindred spirits in Bohemia at the beginning of the 17th century.  As a result of this relation Frederik van de Paltz, nicknamed the Winter King of Bohemia, flees with his following from Prague to The Hague after his defeat in 1620 against the Habsburgs. The escape leads to a much moved exile of the royal family in the former home of Van Oldenbarnevelt on Kneuterdijk in The Hague.

It is conceivable that a wealthy person in the vicinity of the Court of The Hague with a lot of sympathy for the uprising in Bohemia names a farm after the Central European kingdom. Such a farm name often goes on to its residents and their descendants. This may have happened at Vrederust farm where Sijmen Jan Philipsz. lives, or at the farm of Dirk Jansz. of Bohemen in Eikenduinen. 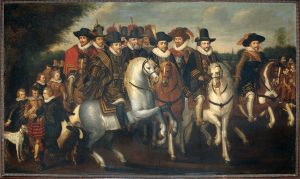 Left at the front Maurits van Oranje. To his right his nephew Frederik V van der Palts and his half-brothers Frederik Hendrik and Filips Willem. In the background some of Nassau’s. Probably painted  around 1625 by a follower of Adriaan Pietersz. van de Venne (National Museum Amsterdam).

At the time of the first use of the Van Bohe(e)men family name both farms are owned by persons who may be counted among the elite in The Hague. At Vrederust farm, it concerns the influential printer and publisher Machteld Aalbrechtsdr. van Leuningen (1580-1662), also known as Machteld van Wouw. She not only prints all official governmental publications, but also acquires the patent for the State Bible. In 1632 she becomes owner of Vrederust for 27,000 guilders.
At the farm of Dirk Jansz it concerns the owner duo Jan Purticq, secretary of the Court of Holland, and Jacob Stark (Sterck), bailiff on the Court of Holland.
Further research in private archives of the elite in The Hague may prove the assumptions.

In this context it is relevant to remark there is also an uprising in Bohemia around 1420. Followers of Jan Hus (1370-1415), a forerunner of Luther, then rebel against the power and wealth of Catholics. Next the Pope calls for the fight against the heretics, resulting in five crusades. The support also comes from a circle around the Abbey of Loosduinen, among by selling ‘cross land’. For that reason the name of the Bohemen Kingdom may have already gone round in the 15th century.

During some time a number of grandchildren and great-grandchildren of founder Philip bear the Vercroft / Vercrocht family name. This is related to the fact they have a stepfather or step-grandfather with this family name. This situation is clarified further on when discussing the family tree for the period 1430-1650.

In The Netherlands, the family name of Bohemen (without the prefix  of ‘Van’) also occurs. In 1947, shortly after the Holocaust, 64 people in The Netherlands  with this family name are counted. In 2007 this number drops to 25 people. The name is mainly connected to a Jewish family that comes to the Republic of the United Netherlands from Central Europe at the beginning of the 18th century.
For another part, it concerns a small branch of the Van Bohe(e)men family where, from a certain moment, the family name includes no longer the prefix of ‘Van’.