In the Census of 1947 471 persons with the family name Van Bohe(e)men are registered. More than 80% of them then live in the province of South-Holland. Within South-Holland, the region of The Hague dominates, that is to say the region consisting of the then municipalities of The Hague, Leidschendam and Voorschoten. Striking is also the relatively large number of family members in the municipality of Noordwijk. 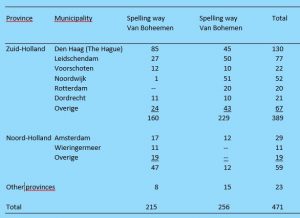 Number of persons in The Netherlands in 1947 with family name Van Boheemen or Van Bohemen (Source: Meertens Institute).

The distribution over the Dutch municipalities in 2007 is shown in the image below. At that time many family members still live in the The Hague region. 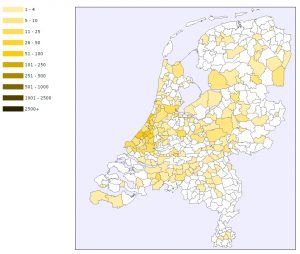 Number of persons with family name Van Bohe(e)men in the municipalities of The Netherlands in 2007 (Source: Meertens Institute).

Particularly as a result of an emigration wave shortly after World War II, the family is now also present in other parts of the world, especially in Australia, New Zealand, Canada and the United States. For these countries numbers have not yet been found.

P.S.
The family name gets different spelling variants in the course of time. Nowadays the Van Bohemen and Van Boheemen variants continue. Whether someone has the one or other spelling variant depends on the choice made at the birth declaration. Until the beginning of the last century, the preference of the author of the birth declaration plays a major role. As a result, even brothers and sisters do not always have the same spelling of their family name.

In The Netherlands, the family name of Bohemen (without the prefix of ‘Van’) also occurs. It is connected to a Jewish family that comes to the Republic of the United Netherlands from Central Europe at the beginning of the 18th century. This family then lives in the city of Amsterdam and the province of Groningen. On the website no attention is paid to those people. In addition, there is also a small branch of the Van Bohe(e)men family, where from a certain point in time the prefix of ‘Van’ is no longer present. This group is indeed mentioned on the website.
In 1947, shortly after the Holocaust, 64 people are counted in The Netherlands with the family name of Bohemen. In 2007 this number drops to 25 people.