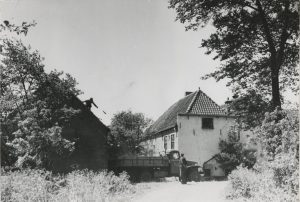 Demolition of Vrederust Farm in 1957 (F.W. Wegman, Archiv of The Hague).

Vrederust Farm in Uithof Polder in The Hague

In 1544, Vrederust farm is inhabited by Sijmen Jan Philipsz (1500-c. 1559). He is a grandson of family founder Philip as described in the family tree 1430-1650. In 1632 the farm is sold by descendants of Sijmen Jan Philipsz and soon afterwards abandon by them.

The photo has been taken at the demolition of the farm in 1957. At that moment the pans from the shed are thrown into a truck. In the background the façade of the farm can be seen. The figures on this façade indicate, that the farm dates from 1593.

The existence of the farm lives on in the name of the nearby residential district, reading Vrederust. 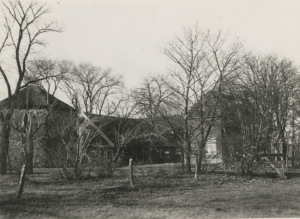 Bohemen Farm in Segbroek Polder in The Hague

The first family member settles on this farm about 1585. It concerns Jan Cornelisz (c. 1555- after 1623). His son Dirk Jansz succeeds him. As far as known, he is the first relative having the family name of Van Bohe(e)men. The relevant deed dates from 1636.

About 1644, Dirk Jansz moves to an other farm in The Hague. The farm he leaves, keeps named Bohemen.

The buildings on the photo date from 1861, when a rebuilding takes place due to a fire. Around 1943, the farm must give way to a new residential district of The Hague. The demolition may have accelerated due to its location in the zone reserved by the German coccupiers for the Altlantikwall (cleared away after the World War II).

The existence of the farm lives on in the name of the surrounding residential district, reading Bohemen. 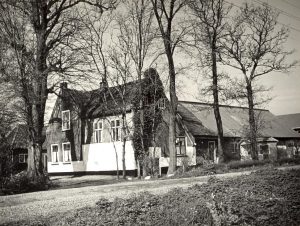 Noorthey Farm in Veur about 1967 (Archiv of The Hague).

In 1824, Cornelis van Bohemen (1781-1864) buys this farm from an aunt of his wife. In 1841, a property exchange takes place. Thereby Cornelis acquires the farm Vliet and Wegen, located in Voorschoten, right opposite Duivenvoorde Castle. Nevertheless Cornelis stays on the Noorthey farm, but as tenant.

In 1907 Noorthey farm is auctioned. The property returnes then to the Van Bohemen’s.

The farm is no longer operational. Shortly after 2000, the house and the dairy barn behind it are restorated. Thereby a splitting up into two residential units takes place. The family member owning the farm nowadays lives in the former dairy barn. 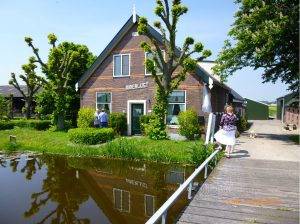 Akkerlust farm originates from the former country-seat Akerlust. In the top of the façade, the year 1765 is shown. In that year the Damhouder Polder is reclaimed.

The farm is still in full operation. In 2015, a new dairy barn is built, housing almost 200 cows. At the same time, a son enters as successor. Akkerlust is therefore record holder in the matter of duration that the family Van Bohe(e)men is farming at the same location.

The old dairy barns have been converted into hotel rooms and apartments (a total of 8 units). That is why the farm is named now Hotelboerderij Akkerlust. Furthermore, Akkerlust is a educational farm. Every year, two classes of neighboring primary schools get the opportunity to work on the farm at least twenty weeks during an afternoon.

A detailed description of Akkerlust and the family members descending of the farm can be found in the book ‘De Stompwijkse Knip. Akkerlust en zijn buurtgeoten’ (see Publications).

In 1911 Cornelis Johannes Leonardus van Bohemen (Oostvoorne 1880-Oostvoorne 1959) buys a house with a barn, yard, garden and orchard at De Rik in Oostvoorne (nowadays Brielle). There he starts a market garden.

The house got the name of House of the Two Witnesses. This name has to do with its location opposite the spot where in 1572 the Martyrs of Gorcum are hanged in a peat barn near a destroyed monastery. One explanation for this name is, that two people witnessed the murder. Another explanation is that two people around 1750 witness the excavation of the bones of the murdered monks. They would have made a statement about this to the Pope, after which the Vatican in 1867 proceeded to declare the martyrs holy. The latter formed the go-ahead for the pilgrimage to Brielle.

In 1875 there are already about 9000 pilgrims, mainly in the months of June, July and August. In 1910 this number increases to about 12.500. In the thirties the pilgrimage is at its peak. A new church is then put into use, the Pilgrimage Church H.H. Martelaren van Gorcum.

The pilgrims, sometimes as many as 300-400 people a day, are given the opportunity to eat the bread rolls on two terraces at the Van Bohemen family and order a cup of soup or a cup of coffee. The served soup is made from vegetables from the own market garden. In addition, all kinds of souvenirs such as rosaries and spoons are offered from a display case.

After the World War II, the number of pilgrims gradually declines. In the sixties, when the market garden is repelled, it goes on another track. A second-hand billiards is placed in the barroom and the familiar counter is replaced by a bar with fifteen stools. Pilgrims continue to arrive afterwards, but since then the café is mainly the site of billiards and card clubs.

The House of the Two Witnesses is closed around 2010. On 23 July 2011, a fire breaks out in the apartment above the café and a hemp growing is discovered there. Afterwards, the building is demolished and becomes part of a housing site with the project name Two Witnesses.